Florida and Ohio: The deciding factors in the race to the White House

I have been using Condor to do Social Network Analysis for the last few weeks to get some insights into people's thoughts on Barack Obama and Mitt Romney. Since the race is so close, I was getting inconclusive results. Both candidates were equally popular and had very similar sentiments going for them.

This morning I saw a beautiful info graphic on The New York Times website that showed the various possible paths to victory for both the candidates depending on which swing states they could win. After playing around with it for some time I realized that if Romney loses Florida, he would need to win all the other swing states (8 of them) to get to the white house. Moreover, we also know that no Republican has ever won the presidential election without winning Ohio. So here's the bottom line: If Romney is to win the election he pretty much needs to win both Ohio and Florida.

Taking this into consideration, I thought I'd restrict my cool hunting to just Ohio and Florida today. I have collected twitter feeds referencing Obama and Romney from Ohio and Florida only using Condor's twitter collector and restricting the collection using geocodes. Here are the results,

We can see that more people are talking about Obama than about Romney. i.e. in SNA terminology, Obama has a higher betweenness centrality.

The following image shows the sentiment analysis for Obama, 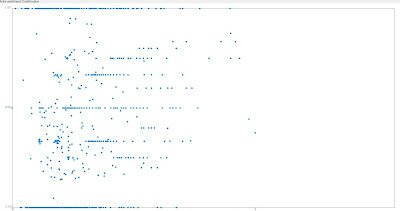 The following image shows the sentiment analysis for Romney, 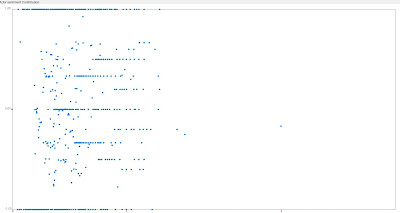 Romney also seems to have a slightly positive sentiment overall.

Now lets look at what terms appeared in the tweets the most.

"vote", "voting" and "tomorrow" are the most prominent terms.

"vote", "voting", "voting" are prominent, but "jobs" and "republicans" are even more prominent. Are people talking about the auto bailout which saved jobs in Ohio? I am not sure. But if they are, then its good news for Obama.

I used Condor's taxo tool to look for terms pertaining to emotions that appeared in the tweets. Here's Obama's analysis,

Of all the terms that appear 22% are related to purely positive emotions (hope, love, compassion, victory, etc) and 12.8% are purely negative (disgust, fear, etc)

I did the same analysis as above for Florida. Here is a summary of the findings,

Bottom line: Since the race is so close, my predictions are only 50% accurate. At this point, popularity is the only differentiating factor between the 2 candidates on twitter. I am curious to see when all else remains equal, does popularity alone determine a candidate's chances of winning. We will find out soon. :-)

Following images were created from Florida's data, similar to those created for Ohio earlier in the post: